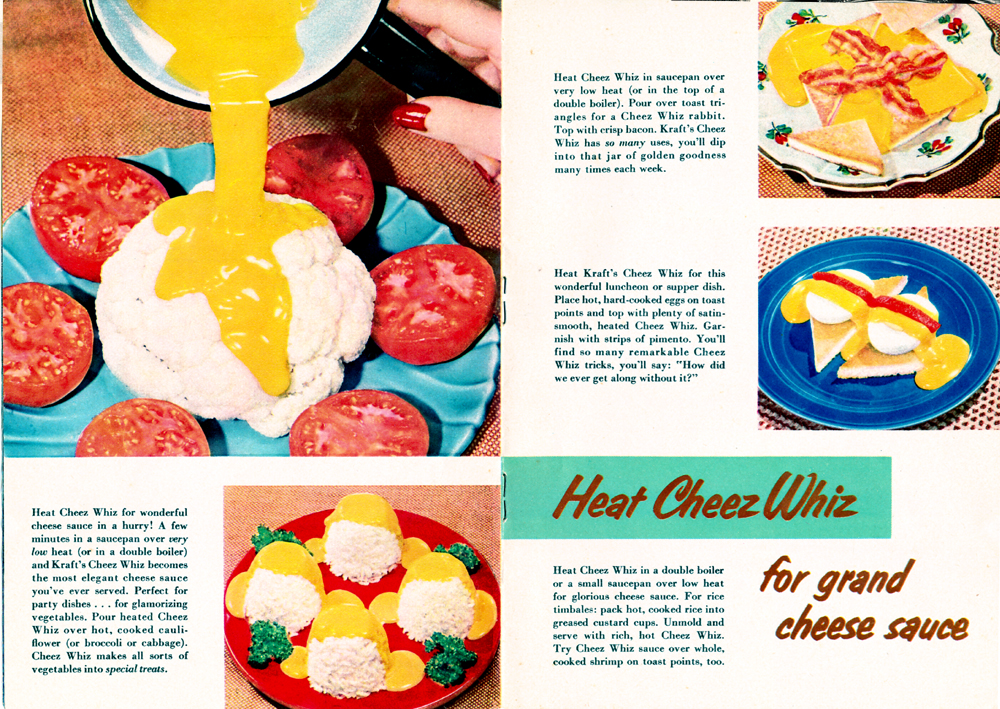 Like the scene in the Wizard of Oz where Dorothy leaves the muted sepia-tones of Kansas to enter the Technicolor splendor of the wonderful Land of Oz, we’re once again treated to the beauty of Cheez Whiz in all its incandescent glory.

The serving suggestions finally start to show some flair as well. Forget pouring it over cauliflower and jump right to Cheez Whiz Rabbit, which is essentially an imitation of Welsh Rabbit, which in itself is an imitation of a real rabbit-based dish.  I’m not sure, but I think the double-rabbit-negative means that Cheez Whiz turns the toast points into real rabbit meat. No wonder “you’ll dip into that jar of golden goodness many times a week.”

And on a final note, when did people stop saying something was “grand.” I think the last time “grand” was used in pop culture was when Clarice used it to describe Rudlolf’s glowing nose just before Christmas, 1964. Frankly, I like “grand’s” air of faux sophistication and plan on using it to add some golden color to my everyday speech. How does “I think Kanye West Shades are grand” sound?

Recipes include Cheez Whiz over Cauliflower, Cheez Whiz Rabbit Rarebit, Hard Cooked Eggs on Toast with Pimentos (and Cheez Whiz), Cheez Whiz Rice Timbales, Cheez Whiz drizzled on Shrimp (who would do this?).