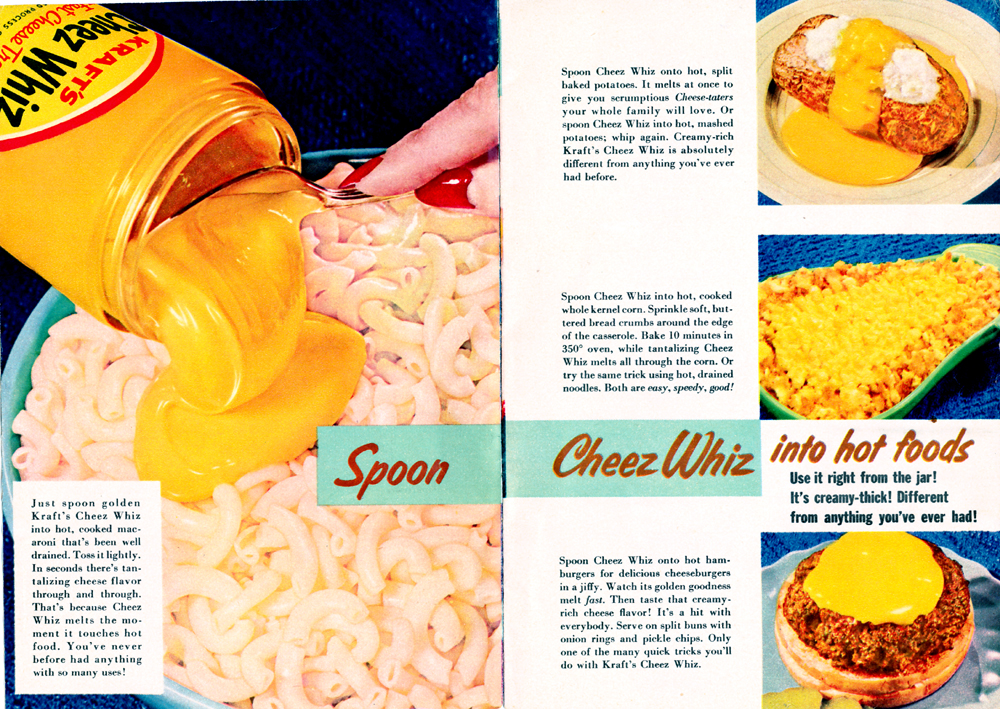 You’ll notice the copy keeps returning to the theme of Cheez Whiz being new and different. In fact, there are three references in some form or another to it being “different from anything you’ve ever had,” just on these two pages.

So what’s the big deal?  Convenience foods were new in the 50s and they really did change the world by freeing the housewife (or for you politically-correct types: the homemaker) from the laborious chore of making everything from scratch. After the degradation of the Great Depression, followed by the deprivation of WWII on the home front, the 50s saw a huge increase in prosperity and leisure time. Convenience foods allowed women to break the chains to the stove and spend less time in the kitchen.

But Cheez Whiz took it even further. I believe it transformed the very consciousness of American women, sort of like that equally-weird, humming monolith in 2001: A Space Odyssey. This was the moment of epiphany when mere housewives realized… “I can be a secretary, no – the boss, no – the CEO, no – a senator, no – even better, the President of the United States, well maybe at least Secretary of State.” The true beginning of the women’s rights movement.

And 1953 may just be the ultimate year for convenience food innovation. Joining Cheez Whiz were the first Eggo Frozen Waffles and the introduction of Swanson’s first TV Dinners. It’s as if Neanderthals had invented the wheel, the Escalade, and the 747 – all in the same year.

Enough of the sociological balderdash…Let’s check out some of the amazing tricks you can perform with Cheez Whiz.