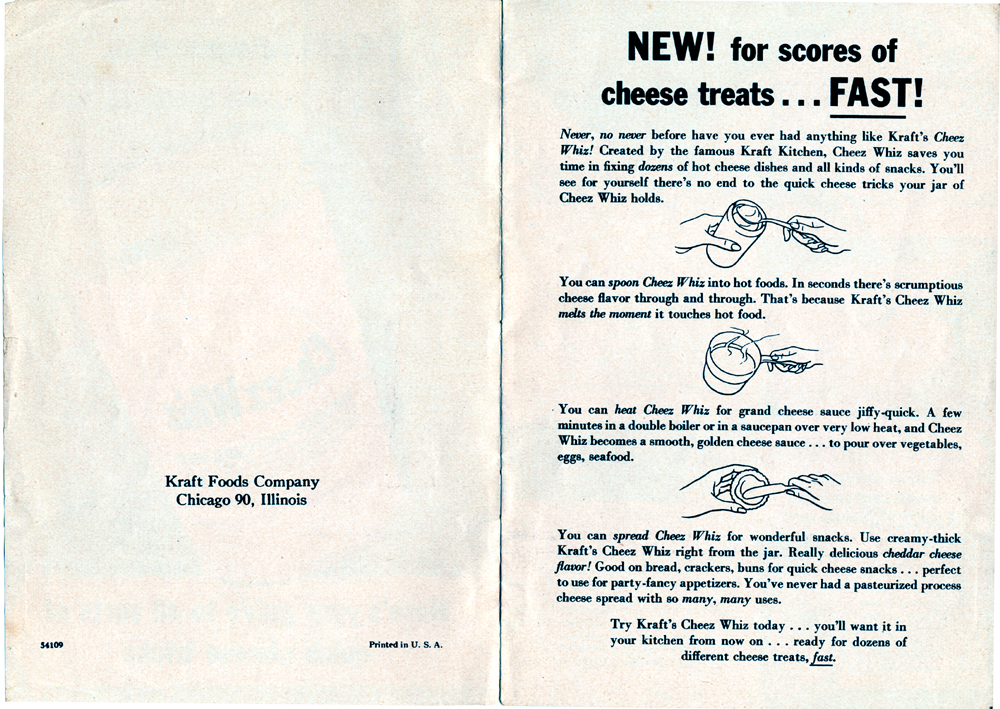 “Never, no never before have you ever had anything like Kraft’s Cheez Whiz!” begins the copy. And they weren’t kidding. You could spoon it, heat it and spread it. “You’ll see for yourself there’s no end to the quick cheese tricks your jar of Cheez Whiz holds.” This begs the question, who is the trick on?

“Created by the famous Kraft Kitchen,” Cheez Whiz was actually the brainchild of Edwin Traisman. Never heard of Edwin Traisman? Well it’s a metaphysical certainty that you’ve enjoyed this culinary alchemist’s handiwork. In addition to combining cheese, emulsifiers and other mysterious ingredients to create the bright yellow cheesy comestible, Mr. T has touched billions and billions with his contribution to the world of fast food.

After leaving Kraft in 1957, Traisman opened several McDonalds franchises in the vicinity of Madison, WI (they remain a popular hangout for slathered Badgers to this day). Traisman’s research expertise soon caught the attention of McDonalds honcho Ray Kroc, who asked him to devise a way to standardize the quality of fries sold under the golden arches. Traisman’s solution was to peel and cut the potatoes, partially fry them and then freeze the fries for shipping to individual restaurants. (In fact, this is similar to the traditional Belgian method for making “frites.”) The result was one of the things that made McDonalds what it is today: consistency. Whether you visit a McDonalds in Encino, Istanbul or Beijing the fries are exactly the same. More on Mr. T here.

Makes you wonder why Mickey D’s has never had cheese fries on the menu.

But enough about fries. So sit back and imagine the wonder of a world in darkness, illuminated by the incandescent golden glow of NEW Cheez Whiz.