How to give a Vodka Party - The magnificent promotional pamphlet that inspired this blog. It captures the essence of late-50s/early-60s striving for sophistication that seems quaint and kooky today. Beautiful design, crisp and involving copy, and a bar-full of classic cocktail and hors d’oeuvres recipes. Scroll down to learn How to Give a Vodka Party now. Estimated date of publication: 1959. 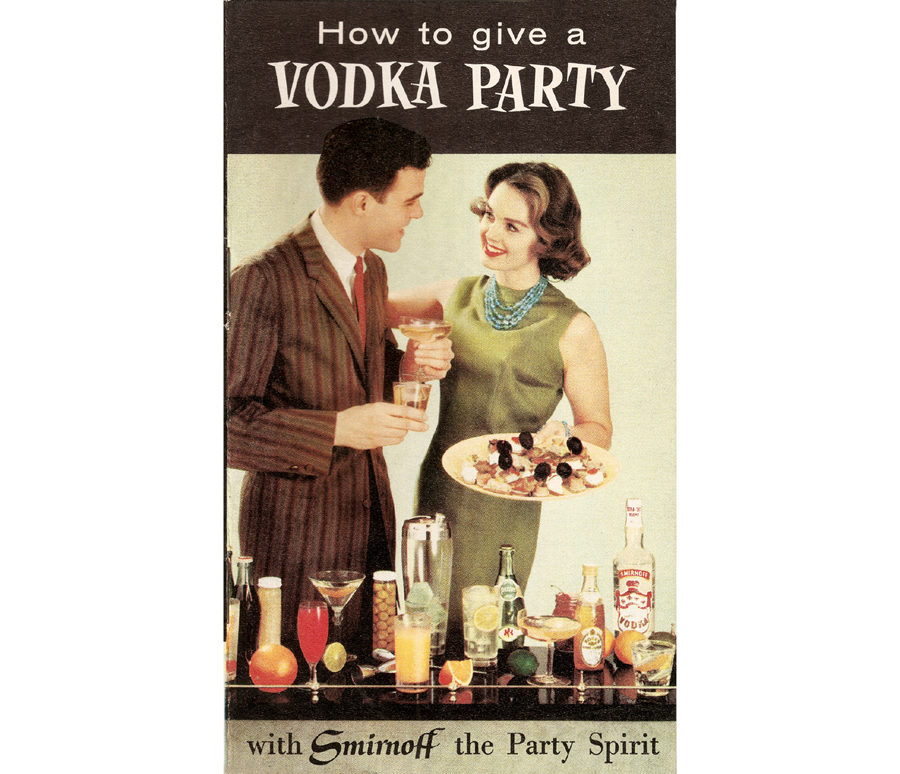 What says elegance and sophistication more than Vodka? This is the pamphlet that started it all here at TheVodkaParty.com. It features amazing design, stunning style and a double shot of classic cocktail and appealing appetizer recipes. So, get in “the party spirit” and throw your own vodka party. You won’t regret it, well at least not until you wake up in the morning after downing one-too-many “Moscow Mules.”

There is no publication date on the pamphlet, but I date it to around 1959 as Smirnoff was running a Vodka Party-themed print ad campaign in The New Yorker and other publications in May of 1959. 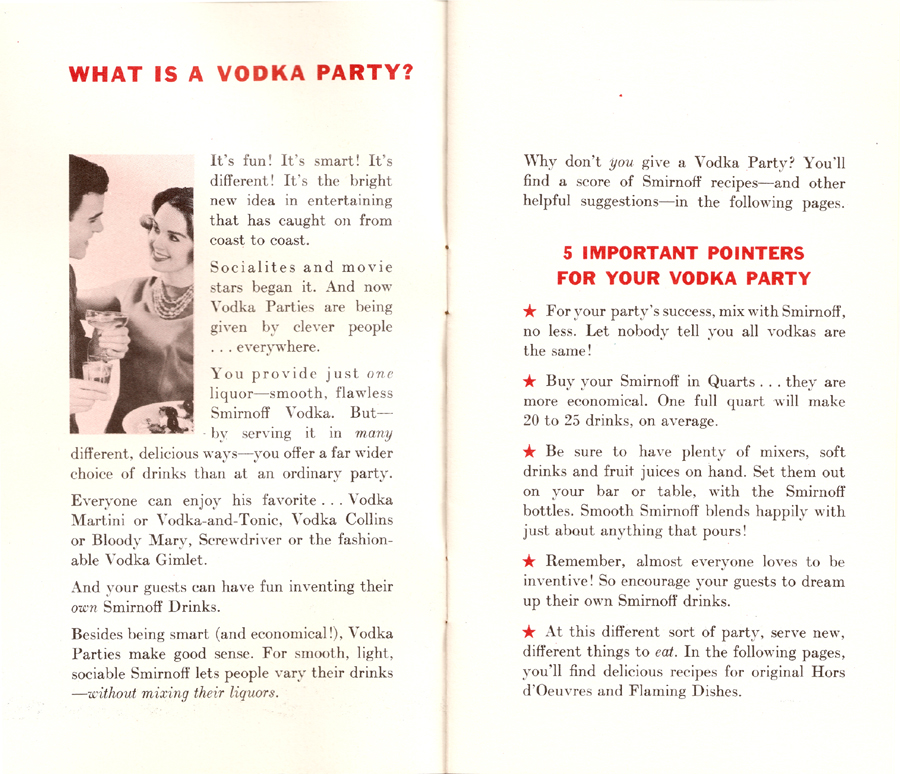 Don’t just look at the pretty pictures. Read the beautifully-written text. It’s smooth and very compelling in painting a picture of why you’d want to throw a vodka party. I love the second paragraph which goes right for the “social striving” jugular of the 50’s psyche. Big time “social-proof” argument at work here…”started by ‘socialites’ and ‘movie stars,’ but now part of a trend led by ‘clever people’ everywhere.” Are you clever enough? If you can afford a bottle of Smirnoff, the answer is a resounding “Yes.”

And is it just me, or is it suspicious that in 1959, at the height of the cold war, Smirnoff, the makers of a “Russian” product would argue against freedom of choice? While it might be smart and economical not to allow your guests to “mix their liquors,” it just seems un-American.

But “not to worry,” the degree of creativity in terms of drinks, snacks and party ideas shows enough good-old American ingenuity, that any vodka party will be strictly red, white & blue.

And one more thing: a sixth pointer for your Vodka Party…have a designated driver standing by, or preferably several.

See what I mean? The next two spreads offer a variety of vodka-fueled cocktails that “will leave you breathless.”

Simply review the names of the various drinks and you’ll be instantly transported back to a time of smooth “cool” with Sinatra crooning in the background as guests in party dresses and pencil-leg pants make mildly risqué smalltalk.

And regarding the Vodka Martini, the recipe isn’t much help. You’ll need to make the call: Shaken or Stirred. 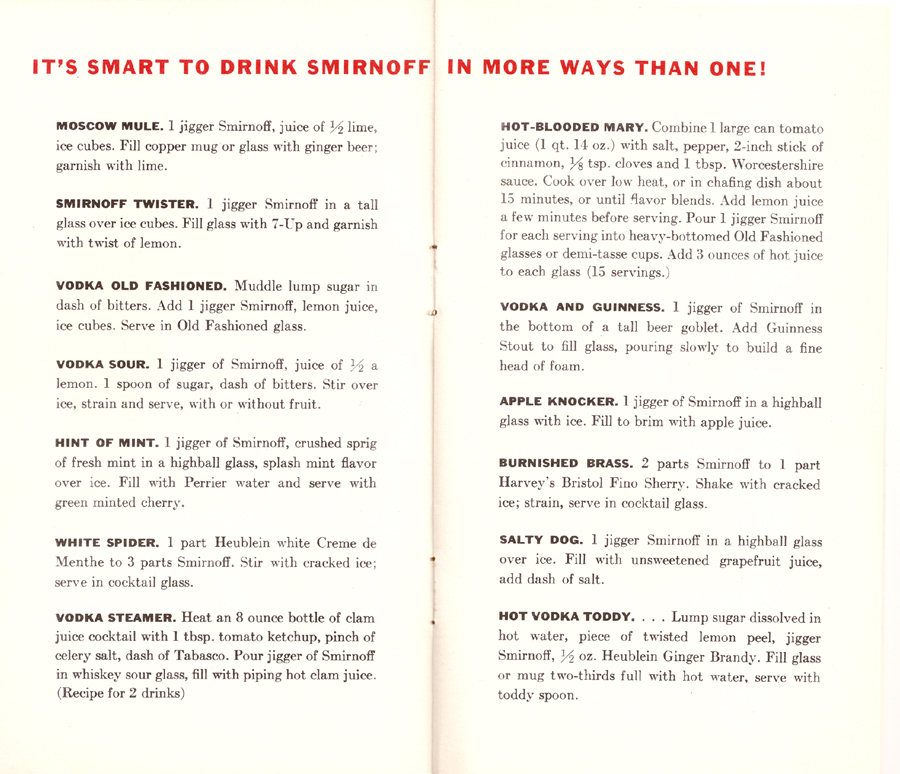 After a review of the all-time classic vodka cocktails, we now move on to a roster of drinks for the more adventurous. I’m intrigued by the Vodka Steamer as I’ve always been drawn to beverages that mix shellfish products and alcohol. One word of caution: imbibe these cocktails at the risk of being labeled a non-conformist. 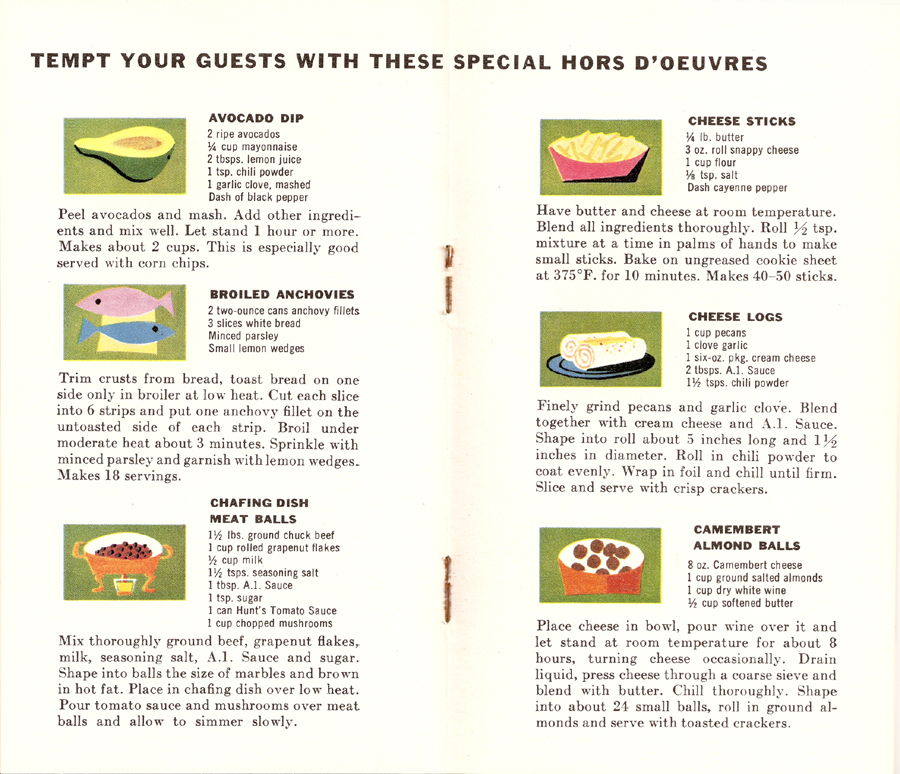 “I can resist everything but temptation” – Oscar Wilde. I bet he wouldn’t be tempted by the broiled anchovies. All kidding aside, the recipes here are mildly tempting. As with the cocktails, we see the safer choices on the first recipe spread (the wacky ones follow). None of these are going to raise any eyebrows. That said, the “naïve” style artwork does more than justice to these old (mostly) favorites. 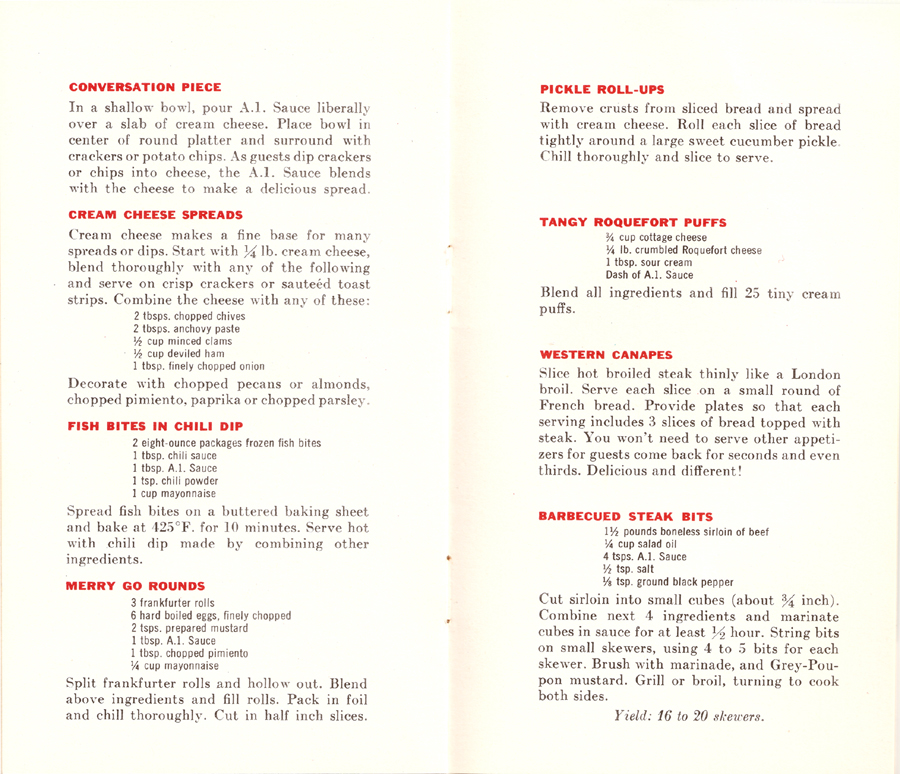 Now the snack table is starting to get interesting. I’m not sure if the recipes are organized in chronological order with the wild and woolier dishes to be trotted out after the guests have gotten a bit more liquored up. It sure seems that way. I’m both attracted and appalled by the “Conversation Piece.”  It starts out as a fairly neat and conventional dish of cream cheese and sauce, but as the night goes on it degenerates into a wild mix of the ingredients as the increasingly-plastered party-goers dig in with greater aplomb. I wonder if this is some sort of abstract representation of the human landscape of The Vodka Party as drinks are downed and inhibitions go out the window.

And from a recent South America obituary: “he succumbed from loss of blood due to FISH BITES IN CHILE” 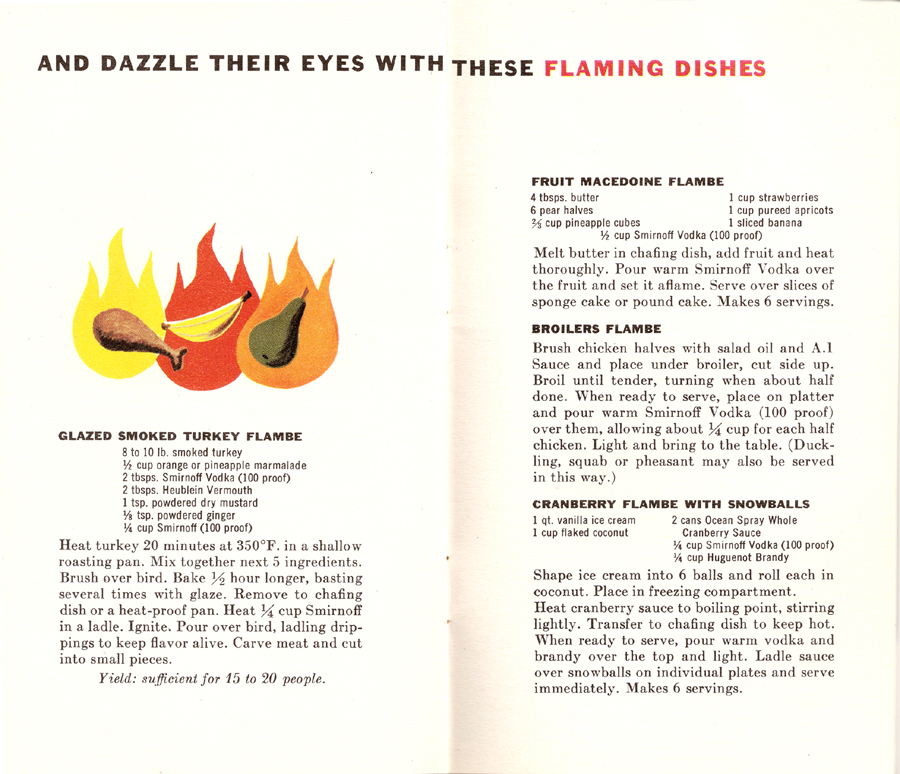 Just when you thought the greatest danger was the humiliation that follows a misinterpreted double entendre, the danger gets physical. Maybe, I’m a 21st century wimp, but I question the wisdom of mixing freely-flowing, strong drinks and fire, especially before the invention of “Stop, Drop and Roll.”

But throwing caution to the wind (a little too much vodka will do that), let’s light some food on fire!  The fruit recipe sounds acceptable, but torching some plain-old roasted chickens seems slightly mundane. But, then again, I can see the guests’ faces “light up” as you sashay into the room carrying the blazing platter. It’s all in the presentation.

And is lighting smoked turkey on fire adding insult to injury? Remember, Ben Franklin proposed the Turkey as our national symbol. 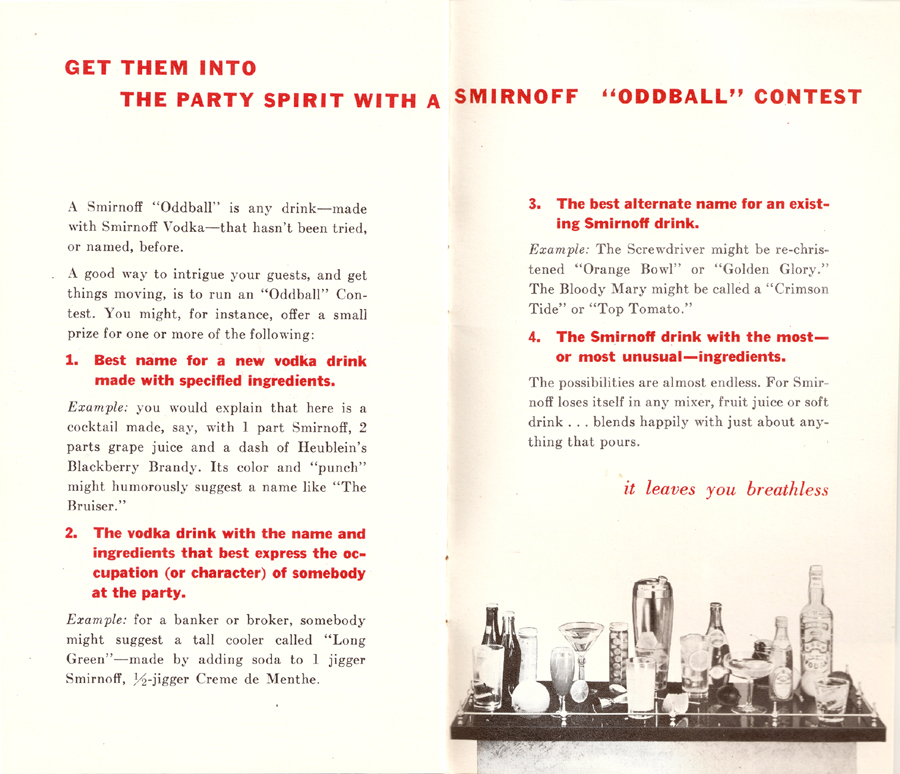 Now, assuming the house isn’t surrounded by fire engines shooting streams of water into every window comes the best part of The Vodka Party, the “Oddball” contest. The timing of this is an interesting conundrum…too early and the guests won’t be “loose” enough to come up with anything creative…too late and the “Oddball” names will be uttered as unintelligible slurring.

In any case, the “Oddball” contest sounds like a fun idea, but I fear it could spin out of control. Without the safety net of trained mixologists (like the ones who developed the cocktail recipes in the pamphlet), things could quickly go to a very bad place. I somehow picture very strong drinks spiked with shudder-inducing ingredients. And the idea of failed experiments being unceremoniously ditched into potted plants offends my aversion to waste (especially of good liquor).

My “Oddball” Entry: THE TIME MACHINE: Send your guests hours into the future with a heady mix of Vodka and Alka Seltzer. They’ll thank you for it. 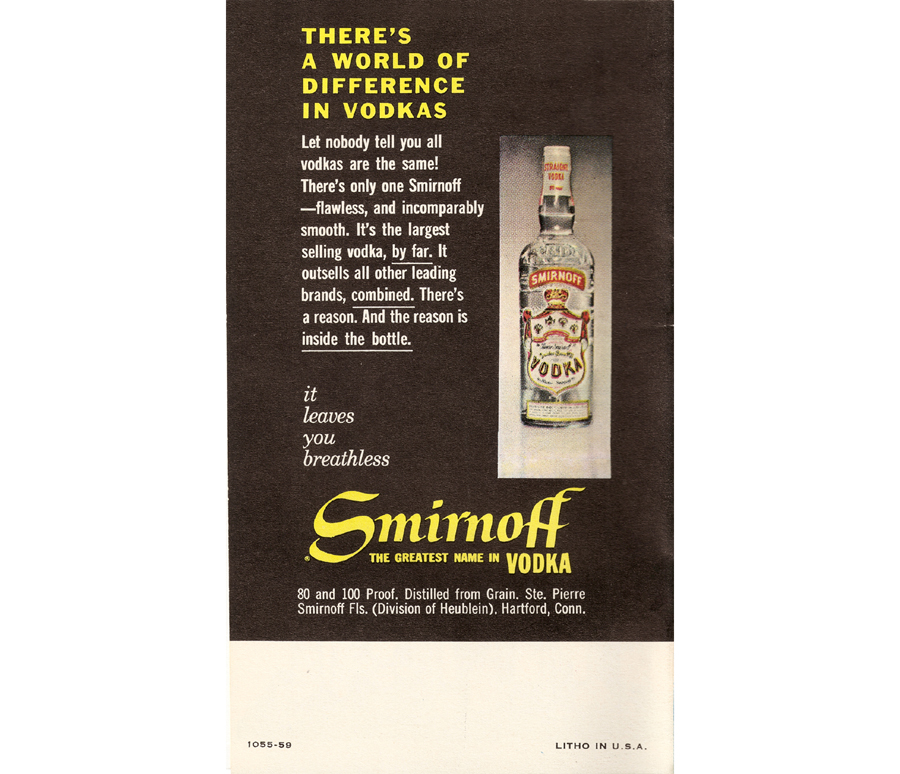 To end The Vodka Party, Smirnoff resorts to a “size matters” pitch. Since Smirnoff outsells “all other leading brands combined,” it must be better. But they didn’t need to go there; The Vodka Party shows that in terms of wild, vodka-fueled fun and games, Smirnoff is number one.