Home→Blog→Uncategorized→Barmate – Is that a tall drink on your platter or are you happy to see me? 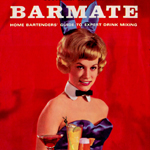 The fulcrum from which the swinging 60s swung was The Playboy club. In that brief period between women stepping out from behind the apron to the birth of modern feminism, nothing else oozed the stuff of the liberated man more than The Playboy Club. The clubs were temples to the god of 60s chauvinism, adorned with the modern equivalents of Greek statuary; only these statuesque beauties were flesh and blood…and wore adorable ears over their perfect bouffant hairdos.

In Barmate, Southern Comfort teams ups with Playboy Magazine for a promotional pamphlet that appeared in the December 1964 issue. But don’t let the low cut tops fool you. This booklet is more about “bottoms up” in the traditional sense, focusing on the swingin’ cocktails that Playboy Club members enjoyed in those exclusive enclaves…and now could be enjoyed at home.

Get ready to flirt with some truly swinging cocktails (not a single appetizer recipe here) along with an inside look at the history of the original Playboy Clubs… and the lives of the real Playboy Bunnies who worked within. (All images and links are rated TV-14 at the most extreme.)

Check out this Barmate now!